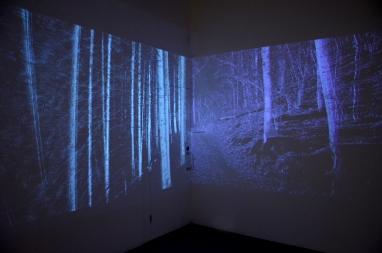 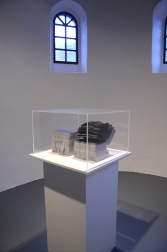 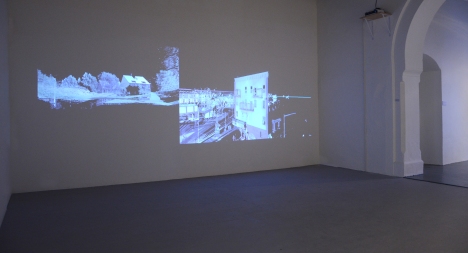 From the start a photographer of virtual worlds, Thibault Brunet is also very fond of landscape. He experiments with imaging tools he borrows from advanced engineering technology invented for military purposes – and brings them into photography. By doing so, he diverts their civilian applications, whether from the field of video game (landscape studies in GTA), geo-tracking with Global Positioning System (photographic mission via Google Earth), or the field of urbanism and industry (modeling of the French coastline through 3D scan or remote sensing laser).

Disrupting the modes of representation, his images take viewers by surprise. There is various forms of disorientation: fusion of the real and the virtual, medium ambiguity, blurring of photography and drawing, or photography and sculpture as in his last creation, Ault. He tackles the question of landscape representation and reveals his ability to renew this genre within the photographic medium. Our selection confronts recent and exclusive pieces – the Ault and Soleil noir series- with more historic and institutional works: the last available editions of Vice City series (collection of the Musée de l’Elysée), the Typologie du virtuel series (2015 Biennale of Lyon, collection of the FMAC, 2016 FIAC revelation, «Paysage français, une aventure photographique» retrospective exhibition, BnF 2017), and the Territoires circonscrits series («Mutations-Créations / Imprimer le monde» exhibition, Centre Pompidou, 2017, FRAC Occitanie collection).

Ault, a duo of sculptures that results from the stratification of thousands of images, is still in production thanks to the patronage of Mécénat du Cercle cité in Luxembourg. These photographic rocks with one spine sculpted to convey sand stone were first exhibited at FIAC 2019.

Thibault Brunet is drawing the material of his next series entitled Soleil noir from the rushes of the videos he shot with a remote sensing laser, especially during the Etants données residency in the United States, supported by the FACE and Aperture foundations. This spring, the artist will experiment printing them on various mediums in the framework of the Jane Phillips Award International Residency, in the United Kingdom, of which he is the last laureate. His white UV ink-glass prints on black are like contemporary ambrotypes. Our selection will also include exclusive pieces from the Territoires circonscrits series. These 3D-modeled images literally blow up the photographic framework.

My work plays with the genres of photographic representation, within the virtual spaces of a world that is digitizing in all its dimensions. For several years, I traveled with a camera in these recreated worlds, in search of images. The series produced in video games borrowed from the registers of the urban landscape, journalism and war reporting. I then turned to the typology, with a piece from Google Earth, at the invitation of France (s) Territory Liquid. I have recently chosen a new approach and am now working on three-dimensional digitalisation of real space, thanks to partnerships with Leica Geosystem and Parrot.

The tools I use to make my images are state-of-the-art, made available to me by the firm Leica Geosystems. This equipment records space and renders it in a cloud of linear points. As rendering is closer to drawing than photography, this technique blurs the codes of representation. The landscape / subject is no longer bounded by the horizon or frame, but extends in a circle around the camera, it fades as it moves away from the lens, leaving a circle blind to its location. The universe thus obtained seems to emanate from the heart of a black hole. If in the real world the sun shines on the visible, here it is the tool that filters the reality and reflects a world that our mental abilities, anchored in the perspectivist scheme of the Renaissance, perceive as distorted or fantastic.

With Soleil Noir, I propose another way of looking at the world: a transmutation of landscape via Lidar laser. This device has a synesthetic perception. It captures light, both infrared and ultraviolet. This information the device translates into images, which disturbingly resemble analog negatives.

This method of recording our environment is neither analogic, nor mimetic – it does not represent the visible surface of things. It presents scientific data we can use to understand the world. The intelligibility of nature therefore depends on machines.

In that sense, the images of the Soleil Noir series evoke 19th century spiritualist photography, which supposedly captured real ghostly apparitions on camera. And more precisely, here the artist proposes “Tophographie Spirite” (spiritualist topography); images showing more than mere landscapes, but rather the intuition of another dimension, a radiance, a strange vibration that goes beyond the surface of things.

From one thousand dots to thousands of pages, AULT is hardly a book and already a sculpture; a beautiful and mad project continued by Thibault Brunet and produced by Mille Cailloux Editions.

Located in the Somme department, AULT is first a cliff, an edge, a piece of French coastline. Equipped with a Lidar remote sensing radar provided by Leica Geosystem, Thibault Brunet captured its reliefs and transferred them onto his book-sculpture. The spine of AULT is sculpted like a arved stone, the surface reveals the asperities of the rock. The combination of thousands of images thus become like the stratums of a sedimentary rock.

The immensity of AULT is condensed in this volume. Over three thousands views make up this bound sculpture. From dips to ridges, we progress through the dark ink of imperceptible images, hypnotized by the details of a landscape that has suddenly lost all its cold minerality. 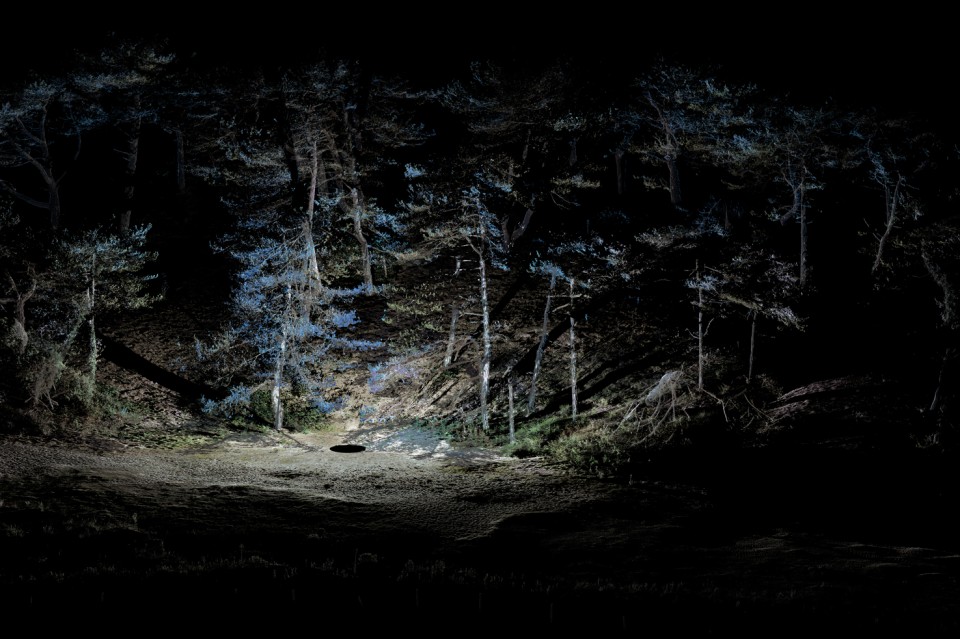 Join us from 6pm for the exhibition opening of Thibault Brunet’s latest work – produced as part of his month long Jane Phillips Award International Residency. Supported by Swansea College of Art, UWTSD.

Thibault Brunet will be giving a public lecture about his practice on Monday 18 March, 1pm – 2pm.

Brunet is currently undertaking a month-long artist in residency within the Photography Department at SCA, UWTSD as part of the Jane Philips Award International Residency Programme. Brunet’s work addresses the relationship between photography and the virtual, in a society that is increasingly on its way to being fully digitalised.

The residency is being kindly supported by Swansea College of Art, UWTSD. 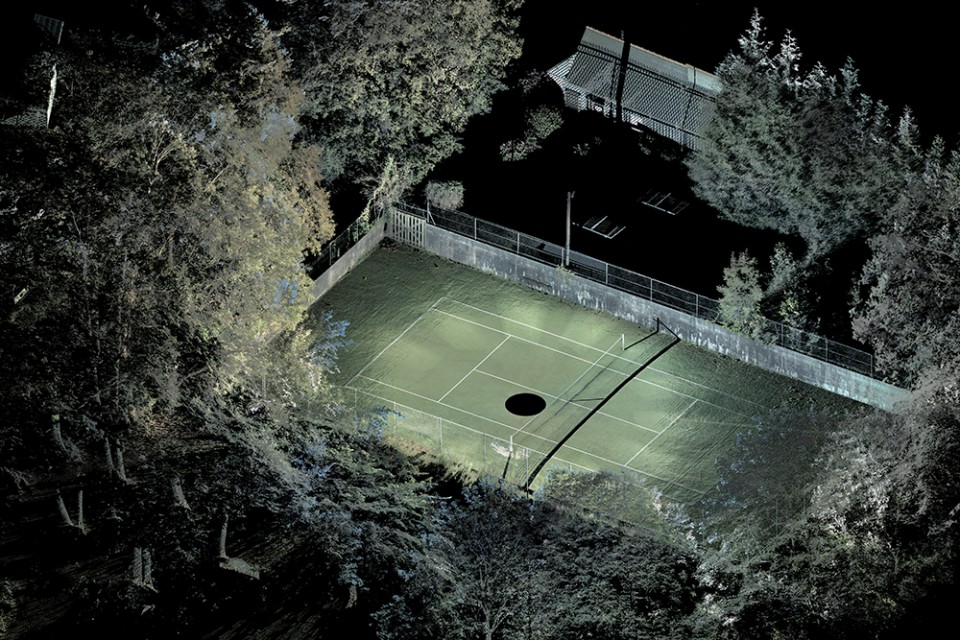 His work plays with photography’s coded genres and questions the relationship with virtuality in a society where the world is on its way to being fully digitalised.

A graduate of the ENSBA Nîmes, Thibault has travelled through virtual worlds with his camera in pursuit of images, exhibiting at reGeneration2 (2011), Mois de la photo in Paris, Berlin and Vienna (2012) and at Talents Foam (2013). Thibault is part of the group project, France (s) Territoires Liquides the work of which was exhibited at the Biennale de Lyon in 2015 and at the BnF in 2017. His last project Territoires Circonscrits has been shown at the Centre Pompidou in 2017 and has been recently exhibited at the MBAL in Switzerland.

Brett Swenson is a multidisciplinary artist based in Brooklyn, New York, who will be supported by the Glass Department at Swansea College of Art, UWTSD during his stay here in Swansea. He has previously been awarded residencies from Residency Unlimited and Urban Glass, both New York 2016 and ‘RAMDOM Assosciation’s Investigation on the Extreme Land: DEFAULT, Italy, 2015.

Brett will be based both at the Jane Phillips Award studio at Elysium Orchard Street Studios as well as at the Glass Department at Swansea College of Art UWTSD. 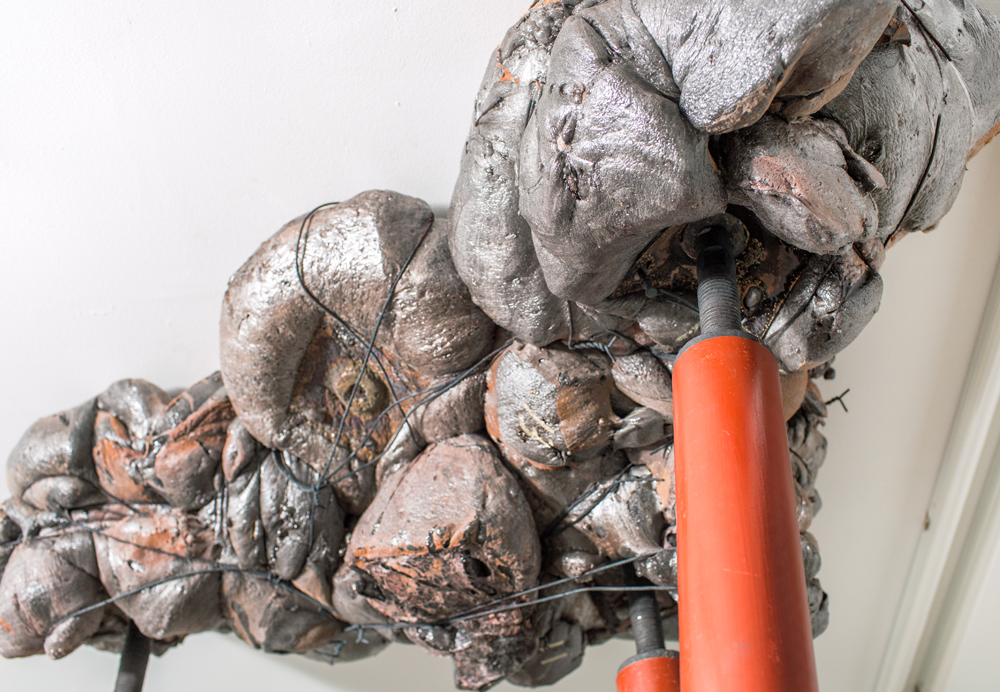 This years recipient is Brett Swenson, a multidisciplinary artist based in Brooklyn, New York, who will be supported by the Glass Department at Swansea College of Art, UWTSD. He has previously been awarded residencies from Residency Unlimited and Urban Glass, both New York 2016 and ‘RAMDOM Association’s Investigation on the Extreme Land:
DEFAULT, Italy, 2015.

We are delighted to announce that the winner of the Residency Unlimited Residency is Helen Dennis, a Brooklyn based Artist who will be based in Elysium’s High Street Studio during February 2016.

Originally from the UK, Helen Dennis moved to New York City in 2002 to study her MFA at Hunter College. Prior to that she studied her BA in Fine Art with honours at the University of the Creative Arts in Canterbury, UK. She has since gone on to create public art works commissioned by the Downtown Alliance of New York, The LAB Gallery for Installation Art, NoLongerEmpty and the DUMBO Arts Festival. Helen’s artwork can also be found in public collections notably of Tiffany & Co. and Avon Inc. She has been a Creative Capital Strategic Planning Fellow at Aljira Center for Contemporary Art and the Lower Manhattan Cultural Council. Helen also participated in the Immigrant Artist Program at New York Foundation for the Arts as a mentor to visiting artists. Helen has shown her work in various exhibitions worldwide and in the US with the support of the Queens Museum, Queens Council of the Arts, Kent County Council and South East Arts UK. Helen has participated in international art residencies with organizations in Beijing, Cyprus, Reykjavik with the Icelandic Arts Association and Caldera Arts in Oregon.

Light, architecture, and urban environments are the focus of Helen’s work. Using alternative photographic processes she creates large installations that are a fusion of drawing and photography. Using layers of drawings on translucent paper she morphs the light into the imagery created; extending the moment in time at which a photograph is created. This process in her art practice focuses on light and it’s role as an integral element within the artwork.

Beyond light, the subject of Helen’s artwork is architecture and the ephemeral qualities of urban environments; shaped by their inhabitants, they present a constant state of flux and kinetic energy. The photo medium appears dominated by drawing; emphasizing the fine lines and understated and seemingly impossible geometric structures that depict the tension and weight of the environment. On close inspection the drawings are abstract and a mass of mangled lines. However when viewed as a whole they read as detailed architectural renderings, which depict the movement and energy found in urban environments.

To find out more about Residency Unlimited please click here